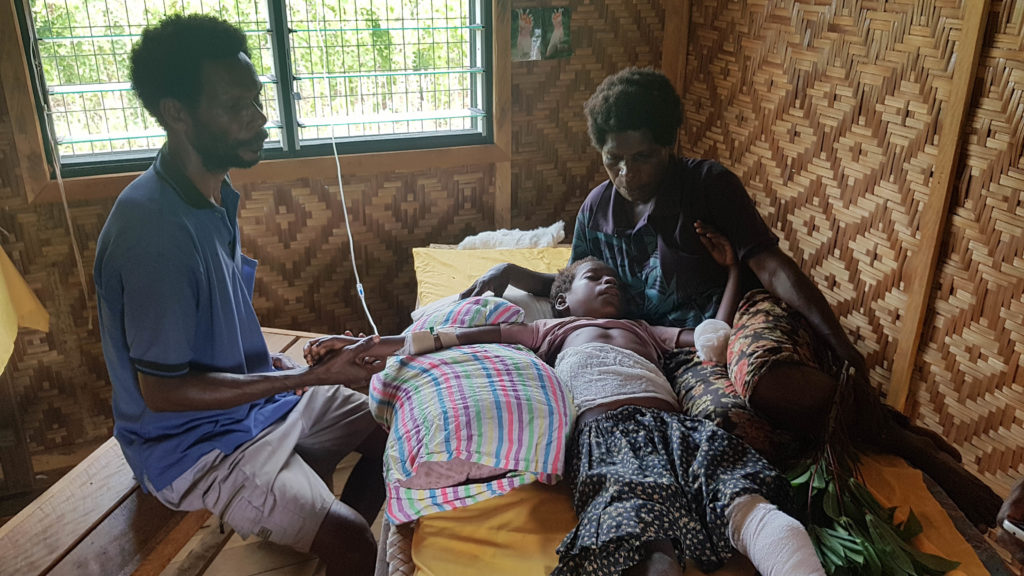 On February 9, 2022, I had finished my work in the village for the Aramba translation projects in Western Province. I had the privilege of accompanying my Russian colleague Olga Formanchuk and her family on their pre-allocation trip to a neighboring language group and we had a wonderful time. But that’s a story for another time.

The day before our return to Ukarumpa I heard that a 9-year old girl was bitten by a snake. They couldn’t tell yet whether it was a poisoned snake or not, but they came to us to buy a K3 flex card, so that they could call a doctor in one of the hospitals for advice.
I figured I couldn’t do much in order to help, so I stayed home finishing up my work and preparing for departure.

When the SIL pilot Johnny Reeves landed his aircraft, a young family with three little children including a 1-year old baby came off the plane. They happened to be wantoks. They came from Kapuna in the Gulf and for some reason Aviation had scheduled the flights in such a way that – instead of picking up this family last for a 40-minute direct flight to Ukarumpa – Aviation scheduled them to be picked up first and carried them all the way through Western Province. By the time they arrived in our village, I could tell they were exhausted already. And it was hot!

We loaded the plane and five minutes before we would take off, one of the medical workers came to me. He told me he had not been able to contact a doctor, yet. And he asked if he could talk with one of the doctors in our Ukarumpa Clinic. I talked with Johnny and I still praise God for his flexibility, while he was balancing between the needs of this young family, this new emergency and his own flight limitations, and he graciously gave us 50 minutes. From that moment I was trapped in a whirlwind of emergency phone calls and decision making.

I will save you the details here but this is what I saw when I entered the Aid Post.

It was such a moving scene: the sick girl lying on a bed, with her leg wrapped the wrong way, her loving father holding her arm that was receiving antibiotics that wouldn’t do any good against poison and her mother on the other side fostering her child. The girl was already showing symptoms of poisoning: tears started dropping from her eyes, saliva had come out of her mouth, and her speech had already become unclear.

I sat down with this little family, while I was waiting for the Clinic to call me back. I listened to the story and cried with the parents and prayed with them. And after that it was action time. Dr. Carl called me back and we talked for about 5 minutes. He basically told me that this girl needed anti-venom, but he didn’t know a place where that would be available to this girl. However, he managed to give me two mobile numbers of the nearest hospital in Balimo to check. So I called the hospital in Balimo with one simple question: ‘Do you have anti-venom for a poisoned snake bite?’. They couldn’t tell me, because they couldn’t find a doctor.

We could send her to Balimo without a guarantee they would have anti-venom. I decided that I wanted to take that risk, because by that time it was pretty obvious that if we would do nothing, this girl would likely die.

However, we had a big problem. You cannot just drop a child at a hospital far away without a caretaker. And our plane was full. The girl could and should lie on the floor, but there was no seat available for a caretaker.
All passengers, including a young local man from Aramba, had valid reasons to fly. Someone had to give up his or her seat. And since nobody seemed to be able to give up their seat, the only reasonable option was that I gave up my seat. Wow, that had an impact, because the next flight would be in three weeks’ time. I thought about my lovely family who supports me very much. But five weeks from home would be pretty rough. And my planning at the Training Centre would be severely disrupted. I even thought: well, if I had not been here, what would they have done? The answer was clear: they could have done nothing. And my next thought: But you are not ‘not here’! Isn’t this God’s perfect timing? Would you really be happy if you are reunited with your family and then you get the message that this girl has died?
I looked at the girl and made my decision to stay back in the village for an additional three weeks, if Erna would be okay with it. And that lovely woman said: ‘Yes, follow your heart!’ I checked with Katawer, my village host, and he said it was okay. I shared my decision with the pilot and at that moment Katawer put his arm around my shoulders, as if he would say: ‘I feel with you, but we’ll take care of you!’ I foster that moment! These were going to be three difficult weeks. For myself, for my family. But it would be worth it if that’s the way we can save this girl’s life.
So we started offloading my cargo and I was almost done with that when my wife in a 5 second phone call asked me if the 5-year old Zakhar could not sit on his parent’s lap. And that was okay, given this case of emergency! But we’d still have to lose another 50kg of cargo. We selected 50kg to stay behind and decided to go all together.
I was thrilled, I called my wife and she cried right at the time that our wantoks from the Wycliffe office in the Netherlands came to our house to visit us. That must have been a strange moment for them.

They picked up the girl, put her on the floor of the airplane (as per instructions of the doctor), and – believe it or not – we took off with no less than 14 people on board! I’m impressed by how the pilot had calculated everything accurately to guarantee a safe take off. We needed the whole runway and I held my breath until the end of the take off. We landed in Balimo, where an ambulance was already waiting for the girl to treat her with – PRAISE THE LORD – available anti-venom!!

We arrived in Ukarumpa around 5.30pm making this a working day of 12 hours for the pilot, a travelday for this young family of about 12 hours (instead of 40 minutes, you remember?) and a day full of emotions.

On Friday I called Katawer and before I could start talking he expressed his gratitude on behalf of the community. I have never heard him say so many words of appreciation and he said: ‘This time I learned something!’ And I asked: ‘What did you learn?’ And he said: ‘Your decision to give up your seat and stay here for another three weeks set a huge example for us. You gave us an example in putting the interest of others above your own interests. That meant a lot to us!’

I said: ‘That’s what Jesus did for us.’ And I praised the Lord for this opportunity of following his example. And I actually even didn’t have to stay there for those three weeks!

And I asked: ‘But what about the girl?!’ And he said: ‘She is doing fine! She started eating again!’ Praise the Lord for blessing all our efforts in trying to save this girl’s life!

Through all combined efforts our faithful God saved the life of this precious 9-year old girl.

Thank you, SIL Aviation, for allowing the multiple exceptions to normal procedures in this emergency. Thank you, Johnny, for your flexibility and for your professional, adequate acting, it was a tough day for you!

Do you want to support the Aramba Community in Bible Translation? Give a donation through Wycliffe USA:

Thank you for partnering with us in making God’s Word available to the Aramba people!

Zondervan Handbook to the Bible

Discover fascinating, thorough, and enriching insights into the Bible with the bestselling and internationally acclaimed fifth edition of the Zonderva

The world's most powerful Bible software brings you the most visually striking new study Bible! From the makers of Logos Bible Software, the NIV Faith

Devotions on the Greek New Testament

Devotions on the Greek New Testament can be used as weekly devotional or as a supplemental resource throughout a semester or sequence of courses. The

131 Christians Everyone Should Know

This book offers a succinct yet thorough introduction to 131 of the most intriguing, courageous, inspiring Christians who ever lived. It tells how the